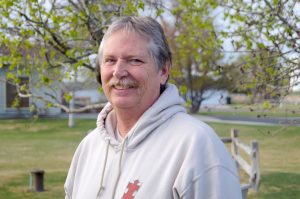 Robert Smith has been doing construction for almost as long as he can remember.  He grew up in Geraldine, in central Montana and went to work building grain bins and pole barns right out of high school.

“I like to build things; I don’t know how else to explain it,” he says. “Someone draws plans and I build them. I know what my piece of the puzzle is, and I do that.”

Once he moved to Billings 30 years ago, however, he learned there wasn’t as much call for what he’d been building.

“Jeremy is a great guy to work for,” he says. “He stays busy, so work is very steady, and that’s nice to have.”

Robert, who has fourteen brothers and sisters, has been married for 26 years and has five children of his own.  All but one live in Billings, with one attending college in Havre.  He also has five grandchildren, who he says are much easier to take care of than his own kids were.  He enjoys spending time with them all, especially when they can take time to head outdoors.

“I like to fish—not that I actually catch many,” he laughs.  “I guess that’s why they call it fishing and not catching.  But getting out of town to go camping, having a fire and relaxing is really the point.”