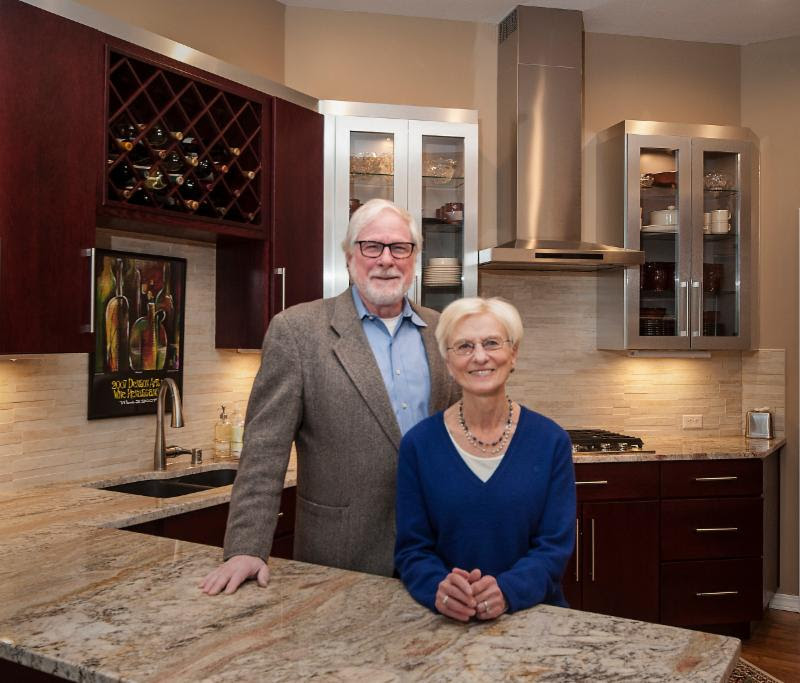 Bill and Marilyn Simmons in their new kitchen.

After living in their home for more than a decade, Bill and Marilyn Simmons were ready for a change. But like many homeowners, they didn’t want to move—they just wanted to make their home work for them.

According to Marilyn, their more than 20-year-old home was beginning to show its age—especially in the kitchen. “The formica was chipped and the backsplash and appliance were original to the house,” she explains. “We needed an update.”

As with many homeowners, the thinking process took the Simmons’ awhile. “We’d been talking about doing the kitchen for five or six years,” says Marilyn. “During that time, I became a fan of Yellowstone Valley Woman magazine.”

Freyenhagen Construction projects and ads were regularly featured on the pages of the magazine, and they caught her eye. She’d been collecting ideas from magazines for years, and she began adding Freyenhagen designs to the stack.

“Several people that I knew had used Jeremy for the remodel of their homes,” Marilyn says. “Everyone spoke highly of him.” After a conversation with a neighbor whose extensive renovation was done by Freyenhagen, they decided the time was right.

When Marilyn first met with Jeremy and Jennie, she had her stack of kitchen pictures in hand.

“Jennie was a real help. She walked through each stage with me an even went shopping with me,” says Marilyn. “It would have been a completely different process if she hadn’t been there to listen and confirm that we were headed in the right direction.”

Marilyn didn’t want her new kitchen to fit the status quo – she was looking for something a bit edgy, but not too modern. The Freyenhagen team delivered. Slab-front straight-grain oak cupboards were stained a rich sangria, interspersed with those finished in stainless steel provide a semi-industrial look, while a stacked stone backsplash delivers a more traditional nod.

“It’s unique, but not completely off the charts,” Marilyn says. 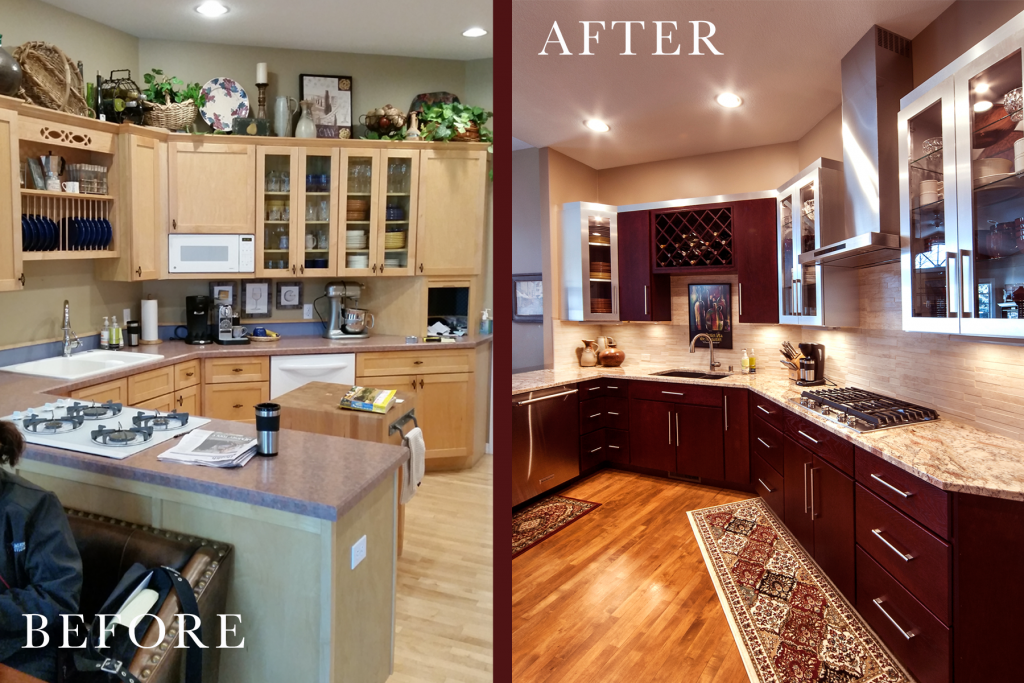 While the footprint of the kitchen is the same, the functionality of the space is much improved. A pantryand lazy susan were replaced with pull-out shelving and storage units. “It felt like we had more room even though we didn’t actually change the size of the space,” says Marilyn.

The Simmons’ kitchen was attached to the family room, so they had to move things out of both rooms and live in the basement while the project was completed. Freyenhagen Construction’s scheduling system helped the couple see real progress, which kept frustration at bay.

“Throughout the process I could check online to see what was supposed to happen each day or each week,” Marilyn says. “It was so comforting to know what was going on with the project.”

It’s been several months since the renovations were complete, and Marilyn says that she and Bill wouldn’t change a thing.

“When I get up in the morning and pad out to the kitchen to turn on the coffee, it makes me smile,” Marilyn says. “I love my kitchen.  I’m a big fan. If anybody asks, and most do, I always tell them that I give Freyenhagen Construction an A+”.